Disposing stale food in the trash seems like the end of  story, but it is only the beginning of so many problems.

A quarter of the food we produce as a country, ends up in a garbage site. This can be linked to humans purchasing more than they can consume, or not being able to finish what they thought they could wholly consume. When we throw away these leftovers in the dumpsites, animals rush to scavenge.

The norm of animals feeding in dumpsites is not something very new in our areas of residence, or work areas. Many are the times you find them scratching on the site, to unearth whatever edible they might find in the layer of rubbish.

Animals do not feed in areas trash because they like it, but it is because their freedoms which amount to their welfare have been neglected. Such include; Freedom from hunger and thirst, freedom from fear and distress, freedom from pain and injury, freedom from discomfort and freedom to express their natural behavior.

When you overlook any of the freedoms, hunger and thirst especially, they rush to look for alternatives elsewhere.

When you let heaps of trash become part of an animal’s menu, it results to the following problems;

The best solution is to ensure your animals have  constant and enough supply of balanced feed and clean water, to avoid them roaming in the dumpsites, in search for the same.

Also ensure responsible ownership of your animals. This will restrict their movement around the neighboring towns and lower risks associated with unrestricted , irresponsible movements. 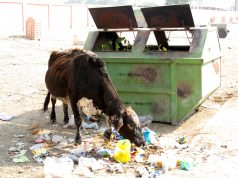 A QUARTER OF URBAN WASTE ENDS UP IN OUR ANIMALS’ TUMMIES

Course Facilitator: Alex Chamwada Dares You to Work With The Media For Visibility

Meet Our Course Facilitators: Dr. Alubbe: Meet Him in the Communications Skills Course for...

Have you Registered and Paid for this Communication Course Worth 20 CPD KVB Points?

Course Facilitator: Alex Chamwada Dares You to Work With The Media...

Meet Our Course Facilitators: Dr. Alubbe: Meet Him in the Communications...